Protests erupt in Bangladesh and Cambodia

Bangladeshis and Cambodians have taken to the streets to protest  economies and political systems in which they feel underrepresented. Both protests were featured separately in the New York Times yesterday.

I visited both of these countries in researching Where Am I Wearing. Each is a major player in the garment industry.

The industry referenced in the Bangladeshi story:

The struggle between the two political coalitions has paralyzed Bangladesh, unnerved Western governments and wounded the country’s vital garment industry.

The industry referenced in the Cambodian story:

Touch Vandeth, 24, was one of thousands of garment workers on strike who demanded a doubling of the minimum wage to $160 a month, a sharp increase that would put wages well above those of Cambodia’s regional economic competitors, including Bangladesh, Myanmar and Vietnam. Ms. Touch…

We didn’t send out Christmas cards this year. So this is it. Merry Christmas, Happy Holidays, and we hope you enjoyed the day as much as we did. 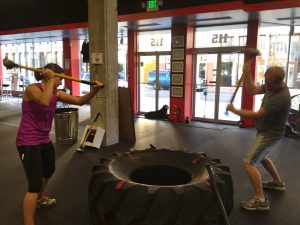 about my CrossFit journey over at the blog of the Arsenal, Muncie’s only CrossFit gym. My latest post…

CrossFit showed us how strong we can be

CrossFit was the best thing that happened to my family in 2013.

I know that sounds like an overstatement of immense proportions. It’s not.

Annie, my wife, agrees. And if you know Annie, she doesn’t overstate anything.

Don’t get me wrong, we had a lot of awesome things happen personally (I taught my daughter how to ride a bike…on Father’s day!) and professionally (my second book came out), but the last year has been tough.

Honestly, we’ve sort of been reeling since September 18th, 2012. That’s the day we learned that our son Griffin might be on the autism spectrum….

If I won the Mega Millions…

I’ve never played the lottery nor do I intend to start doing so, but it’s hard not to hear the amount of the jackpot of the Mega Millions lottery – $636 million – and not ask: “If I won two-thirds of a billion dollars, how would it impact my life?”

We would move into a new home, about the size of our current home, but with more land. I want the kids to be able to hit a baseball as far as they are able in our yard. But we’re going to do that anyhow. Our house went on the market yesterday. So I guess that really doesn’t count other than we’d pay cash for the house.

I wrote this post for and it first appeared at FacingProject.com. I’m the co-founder of the Facing Project which seeks to connect people through stories to strengthen communities.

A participant of Facing Homelessness in Ft. Wayne, Indiana, decided she wanted to do something to help homeless individuals sleep better at night. Now she makes and gives sleeping bags to Ft. Wayne’s homeless.

A students writer who participated in Facing Hope in Rome, Georgia, got a job at the magazine that published the books for the project.

Books from Ft. Wayne’s Facing Homelessness are being used in sociology classes in Florida.

TEAMwork for Quality Living, the community partner on the very first Facing Project, organized 15+ local nonprofits to share stories of those in Muncie Facing Poverty. Less than 6 months after…

Dalene and Paul Heck of Hecktic Travels we’re traveling in Phnom Penh when they witnessed a protest by garment workers. Police met the protestors with riot shields, rubber bullets, and then actual bullets. Dalene wrote about the protest and how she now vows to change as a consumer.

Their plight is one common to this part of the world – one of being overworked in deplorable and unsafe garment factories while earning less than the minimum wage. The workers from this particular factory serve H&M, the Gap, and other global brands. They have already been protesting for months to no avail.

“We are embarrassed that you have seen this,” said those Cambodians we talked to about it later.

This is the actual first sentence of a piece on TIME Magazine’s site:

There’s one kind of knitted good that you probably won’t find on Etsy: the kind that comes out a human vagina.

I’ve looked for the origins of clothing around the world, but, I have to admit, I never imagined clothes would originate THERE. And by there I mean vagina.

I’m not sure this is art that I get.  Because I don’t get this at all.  She just stuffs the yarn up there regardless of the time of month and pulls the strands out to knit.  She still knits with her hands.  She just uses her vagina for yarn spool storage.  I don’t see the art, beauty, or vaginal respect that this is intended to inspire.

On the faculty at Ermapalooza! Registration opens tomorrow!

I’m excited to announce that I’m on the faculty at the Erma Bombeck Writers’ Workshop (April 10-12). I’ve been to the conference twice as an attendee, and it is definitely one of my favorite conferences. The conference made me better as a writer, led to some major assignments, a book blurb from Senator Sherrod Brown, and, the best part, I made some real life friends, who are hilarious. That’s the great thing about a humor conference, the people who attend it are typically pretty darn funny.

Writers of creative nonfiction explore truths through verifiable facts, shaping the narrative using the same tools as writers of…

The more than 30 members and friends of my wife’s family bowed their heads to pray. They prayed for the food and for the gift of each other, and some others stuff. I have to admit I wasn’t paying that much attention.

Autographed copies of my books for Christmas

I’ve signed thousands of copies of my books over the past few years.  I’ve also signed a few arms, shirts, posters, and even a Kindle once.  I don’t think I’ll ever get used to folks wanting my scrawled signature in their books.

But since I love having autographed copies of books myself, and I’ve had a few recent requests for books for the holidays….

How to get an autographed copy of EATING or WEARING for Christmas!

Send me a copy of the book you want signed. Please include what you’d like me to write in the book and to whom I should address it. Also include the address where I should mail it. If you have the book sent directly from the book buyer, leave the address info in the comments section.

Read More >
2 comments
Tweet
@KelseyTimmerman
says:
I remember the RoboCop cartoon, but not this horrible theme song - https://t.co/YlVhvcCgsi Also, it's amazing that… https://t.co/4bCKtynkTZ
1 day ago | FOLLOW ME! | RETWEET