SoleRebels at the Clinton Global Initiative

Bethlehem Tilahun the founder of SoleRebels the shoe company I profiled in a recent piece for the World Vision Report recently spoke at the Clinton Global Initiative.

How cool is that?

I believe that SoleRebels is a perfect example of how the apparel industry can be an important tool in lifting people in places like Ethiopia out of poverty.

I spent hours with Bethlehem in her factory and I still am amazed at how a flat tire on the side of the road in Addis Ababa is fashioned into a shoe and sold on Amazon.

Bethlehem starts speaking at around the 13-minute mark.

With a can of insect repellent and a shovel, I approach the skunk’s lair.

And Part 2: The hole is filled! Bring on the skunk.

I wish I knew (in college) what I know now

A knock on the door. Mute button. Silent giggles.

The knocker was Terry our RA. We called him worse things. He was treated like a substitute teacher. His endless threats were powerless to stop the amount of hallway urination, dorm room pot smoking, and an actual kegger in my neighbor’s room complete with Bon Jovi karaoke.

As he knocked he should’ve known that we were going to be trouble. A good part of the hallway residents were jammed in my room playing Madden. It was the first week of college and we were mutinous already. It was Terry’s job to bring us all to hear the author of My Own Country our freshman common reader program book by Abraham Verghese.

Verghese, born in Ethiopia to Indian parents, was…

Man vs. Skunk: Round 2 The Backyard Showdown 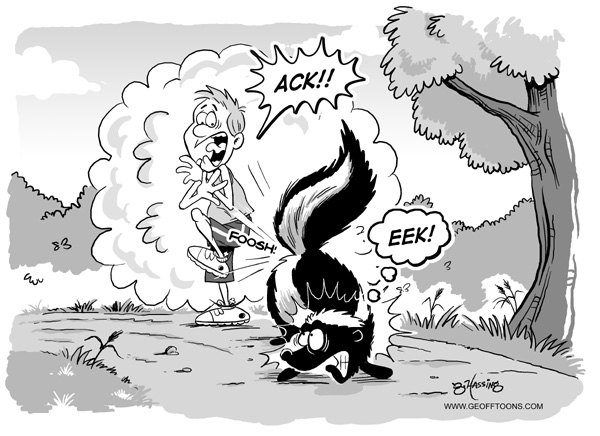 Cartoon by Geoff Hassing of geofftoons.com

10 PM. The air is cool and crisp. It’s one of those September days where the daytime is summer and the evening fall.

It’s rare to knock on the front door of your own house, and at such an hour. But I do. It’s even rarer to be knocking on your front door wearing only underwear. But I am.

Yesterday morning we awoke to the smell of skunk. I’m rather adverse to the smell. Not that anyone enjoys the smell besides my aunt, but the musky rank stank of skunk turns my stomach and gives me flashbacks. You see, I had a rather memorable run-in with a skunk while jogging in high school.

I wrote a story about it. You can read it below the cut.

So, when we awoke to the smell yesterday, I was less than thrilled. We hoped that the skunk had been hit on the road and the wind was blowing just right. We couldn’t have been that lucky.

I checked the perimeter of the house, which sounds much more manly that it was because I was tiptoeing. I was also holding Harper, not as a shield but I’d be lying if I said the thought didn’t cross my mind. That’s when we discovered the hole in the landscaping. At the bottom of the hole was a nest of yellow jackets. They buzzed about riding the updrafts of skunk stank like hang gliders. A series of coarse little skunk turds sat just outside the hole.

I called up the critter control guys and ran my hypothesis by them.

“Doubt, he’ll be back,” they said of the skunk. “He probably got what he wanted and learned his lesson.”

It was with these words echoing through my head that I stepped out the backdoor in my underwear with confidence and said, “here skunky skunkerson.”

Annie had just given me a haircut and she asked me to shake out the cape of clippings because it was dark and she was afraid of the skunk.

I stepped onto our back porch and no sooner than “skunkerson” left my mouth a black and white fur ball scurried between Annie, standing at the sliding door, and me, frozen with mouth wide-open like I had seen Medusa.

I ran the opposite direction across the yard; the mostly full moon displaying the sight for all to see — the cape trailing behind me, a tail of shining hair clippings in my wake. I may have been making a noise that is best translated as “eek” but I believe it was too high-pitched for humans to here.

I bounded across the yard and to the front door and began knocking, not a normal “please, allow me to enter” knock but a “Oh my God! Oh my God! A zombie is chasing me and if you don’t open this darn door now I’ll be infected, and once infected I’ll make it the one true cause of my reanimated-self to track you as long as my half-eaten legs will carry me to find you and eat you very slowly” knock. But skunks smell worse than zombies, so I think my knock might’ve been even a little more panicked than that.

The last I saw of the skunk he was running around the opposite side of the house. The front door would be about the half-way meeting point. I knocked while staring at the corner of the house, willing my eyes to penetrate into the moon shadow.

I cursed at myself and at Annie. We’ve lived here for three years. That’s over a thousand days that we could’ve done an emergency skunk drill: If I’m at the back door and a skunk runs by, I’ll prance across the yard in my underwear to the front door and you let me in. Got it?”

I stood in my underwear, my knocks and fears rising in crescendo. There aren’t many scenarios that would have me standing at my front door in my underwear for all the neighbors to see, but this was one.

Annie came to the door. I burst through and slammed the deadbolt shut behind me.

The skunk is still out there. There are new little skunk turds by the hole this morning. I fear this story isn’t over and that it scurries towards tragedy. Today I’m going to pour a cup or two of gasoline down the hole and fill it in.

The Art of Thank You

I take criticism better than I take praise. This is something I need to work on.

The past two weeks I’ve visited with three universities (Elmhurst College, Pfeiffer University, Wingate University) that have used Where Am I Wearing in their common reading programs. More than once after being introduced I stepped to the mic and said something like, “I need you to introduce me to my wife and daughter each time I walk in my house.”

I reward a very thoughtful introduction with an attempt to capitalize on a few light chuckles. Here’s Deb Burris introducing me at Pfeiffer…

The correct response to an introduction like this is simple: thank you.

I worked my butt off to make Where Am I Wearing the best book I could make it. I’m…

To the Art of the Matter at MRHS

I had a grand ‘ol time speaking with students at Marvin Ridge High School today south of Charlotte.

Where Am I Wearing? was selected for their community reading program and a good portion of today was dedicated to exploring the subjects I write about in the book.

They kicked off the day with a screening of the documentary China Blue which follows a few factory girls at a factory in China. The film had some amazing scenes and I’m so jealous of the access the crew got into the factory. The owner of the factory was kind enough to go on camera time and time again and hang himself, saying things like, “The workers are simple-minded farmers, living 20 years behind. They aren’t smart enough to have…

A (sideways) update on my speaking tour

This is a bit longer than I intended and much more sideways, but the longer I talked the longer my legs got to rest.  It was shot at Morrow Mountain State Park in Biden, NC. I made the mistake of parking my car at the top of the mountain – an easy place to begin a trail run but a not so easy place to end (a trail crawl).

Southern Hospitality is a Saab

An update from Charlotte:

Where Am I Wearing as a Common Reader

One of my favorite moments to recollect from my “Where Am I Wearing?” trip was when Dewan (worker in Guangzhou) asked if I would write about him in my book. Then thhere was the idea of a book – no contract, no agent, nothing written but for a few month’s worth of blog posts. At the time, the moment, made me a little uneasy. Besides not knowing what to tell Dewan, I wasn’t sure what to tell myself. Was the experience bookworthy? I thought it was, but would agents and publishers agree?

Last year I started to get invites from universities across the country who wanted me to come to speak at/with their students. I had an absolute blast doing it. Usually a few classes had… Some folks believe that the apparel industry somehow is part of the problem when it comes to global poverty. To me giving someone a job and dignity is one of the best ways to fight poverty. I’ve yet to come across a better example of this than the shoe company SoleRebels in Addis Ababa, Ethiopia.

SoleRebels’ employees are paid about 300% more than other such workers in Ethiopia. All of the products that go into making a SoleRebels shoe are within a 60 mile radius of the city. As Bethlehem, the founder of SoleRebels, says, “We are green by heritage.”

The piece airs on loads of radio stations across the country this week. It’s my first full…

Read More >
25 comments
Tweet
@KelseyTimmerman
says:
@sharonschneider People who have health insurance through work don’t have the time to use it because they are working!!
4 hours ago | FOLLOW ME! | RETWEET